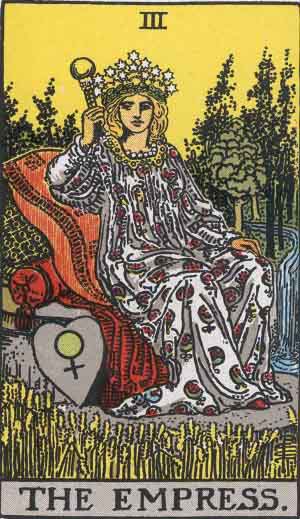 The Empress (III) is the third trump or Major Arcana card in traditional tarot decks. It is used in card games as well as divination.

Arthur Edward Waite and the other occultists are responsible for the starry crown, the emblem of Venus, the waterfall, and the vegetation and wildlife. In historical decks, the Empress sits on a throne, almost always holding a shield or orb in one hand and a scepter in the other. The shield typically bears an eagle, the heraldic emblem of the Holy Roman Empire.

The Empress can be represented by Aphrodite, a figure from Greek mythology. The empress connects with the Death card, for she is accustomed to life, death and rebirth.

According to Waite’s 1910 book The Pictorial Key to the Tarot, The Empress is the inferior (as opposed to nature’s superior) Garden of Eden, the «Earthly Paradise». Waite defines her as a Refugium Peccatorum — a fruitful mother of thousands: «she is above all things universal fecundity and the outer sense of the Word, the repository of all things nurturing and sustaining, and of feeding others.»

The Empress is a mother, a creator, and nurturer. In many decks she can be shown as pregnant. She can represent the creation of life, romance, art, or business. The Empress can represent the germination of an idea before it is ready to be fully born, and the need to be receptive to change. [2]

The Empress is associated with the planet Venus in astrology. [3]

Waite writes that the card carries these several divinatory associations:

Tarot-time.com defines [4] in part as «The message from Spirit is that the creative impulse is in all things and all people, including you, and you must not only accept that but honor it.» [5]